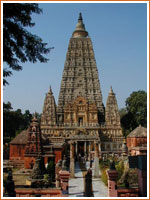 As the place of the Buddha's Enlightenment, Bodhgaya is the spiritual home of Buddhists. It attracts tens of thousands of believers from all over the world. Bodhgaya situated near the river Niranjana, is one of the holiest Buddhist pilgrimage centres since it was here that Buddha attained enlightenment under the Bodhi tree.

The population of this town is 22,000 and is situated at an altitude of 113 m. Maximum temperature in summer rises to 45-47 degree Celsius and minimum is 27 degree, while in winter maximum is 28 degree and minimum is 4 degree. It receives an annual rainfall of 1,860 mm. Most countries with vast Buddhist population have a temple or monastery here.

The 25 m Great Buddha Statue in the Japanese Kamakura style was unveiled by his holiness Dalai Lama in 1989.

By Air : Patna is the nearest airport with regular flights to Delhi, Ranchi, Lucknow, Calcutta, Chennai, and Mumbai. Calcutta, 482 km, has an international airport.

By Rail : Gaya is the nearest railway station. Several superfast as well as express trains are available from Gaya. Gaya is on the main Delhi to Calcutta line and there are direct trains to Delhi, Calcutta, Varanasi, Puri and Patna.

NALANDA : Nalanda was the most renowned university in ancient India. It derived its name from Na-alam-da, meaning Insatiable in Giving, one of the names by which the Lord Buddha was known.

Established in the 5th century B.C. it remained a live center of learning till the 12th century A.D. Bodhgaya when it was destroyed by the invader Bakhtiyar Khilji. Lord Mahavira and the Buddha both taught here for years. Hsuan Tsang. The Chinese traveler studied here in the 7th century A.D. and there is a monument in his memory. He was one amongst many of those from East and Southeast Asia who came here to study logic, meta-physics, medicine, prose composition and rhetoric. The University of Nalanda offered free educational and residential facilities to as many as 10,000 students and 2000 teachers, for it was supported by a number of villages. Its library, Ratna Sagar, is believed to have contained nine million volumes. It is not surprising, then, that the destruction of this university dealt a crippling blow to Buddhist education in India.

The Archaeological Survey of India maintains the Nalanda Museum across the road which houses some exquisite bronzes of the 9th and 10th centuries, Pala dynasty, and other remains excavated at the site. The beautiful Thai Temple and the Nava Nalanda Mahavihara, a center for research in Pali and Buddhist studies, are 2 kms from the main site.

By Air : The nearest airport is Patna, 99 km away.

By Rail : The nearest railway station is Bakhtiyarpur, 38 km away connecting Delhi-Howrah mainline.

By Road : Nalanda is 90 km southeast of Patna and only 11 km from Rajgir. It is 80 km from Bodh Gaya and is easily accessible by well-maintained highways.